Last weekend was another show for Alexandrite Akiro and yet again he made us very proud. The show was at Elsecar, Barnsley and we went both days. There were 12 rings, 6 per day and on the Saturday Akiro made 4 Finals and on the Sunday 5 Finals, including the very last ring where he received another BEST Alter Final. Way to go Akiro!!!

A big Thank you to all the judges who finalled Akiro and of course mum who came along on the Sunday to help with the show catalogue. After a tiring Saturday I was very glad of the help! Also mum made another great lunch, thanks mum xx

We also had the pleasure of showing Musrafy Yanara for our very good friend Maria, she did brilliantly with many BEST finals and we were very tempted to kidnap her! Well Done Yana!

It was lovely to see Alexandrite River's baby girl too, Midnightstar Rika who also did very well at her first show. Well Done Rika!
Posted by Alexandrite Siberians at 11:45:00 1 comment:

Mystique's kittens are growing very fast and will be off this week for their first vaccinations. They are all super kittens and are very playful and cuddly. Mystique has again been a fabulous mum.

The kittens will be ready to go to their new homes around 17th December, just in time for Christmas!

These are the last kittens to go from Alexandrite this year and we are looking at plans for next year.

We are hoping to get photos soon. At the moment the Seal Lynx (Tabby) Point Girl is under assessment.

Gem's kittens will be available to go to their new homes end of January.
Posted by Alexandrite Siberians at 21:17:00 No comments:

This handsome boy is Optioned

Posted by Alexandrite Siberians at 21:15:00 No comments:

This super boy is Optioned

Posted by Alexandrite Siberians at 21:09:00 No comments:

This sweet girl is currently Under Assessment

Posted by Alexandrite Siberians at 21:06:00 No comments:

Akiro does it again!! Another fantastic Show Result!!

We went off to Newbury yesterday for the CatTICA show. We took along Alexandrite Akiro to hopefully get more points towards his Supreme Alter Title and he couldn't have made us prouder. He finished the show with a total of 5 Finals

Again we were asked "Why is he an Alter???" Which just makes us very proud of our Siberians and  for anyone who breeds cats, you can't keep everyone in the breeding program. This the judges understood. But by showing him as an alter it proves that we have picked some fantastic Siberians as our foundation cats and we are keeping those lines going with our own bred Siberians. 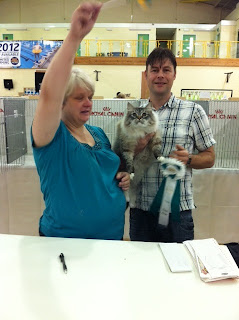 Again thank you to all the Judges who finaled him and especially to Kurt for finaling him BEST Alter.
Posted by Alexandrite Siberians at 11:32:00 3 comments:

Galina's Kitten
We have received an enquiry for Galina's Brown and White girl so at the moment she is optioned, awaiting receipt of the deposit.

Mystique's Kittens
All kittens are doing well and just starting to explore more and to eat solids food. One of the boys has even been pinching mum's! Currently all kittens are under assessment.

Gemini's Kittens
We took Gemini for a scan yesterday just to check how she was doing. All is fine and we could see on the scan between 3 & 4 kittens. It was so exciting see the hearts beating, and the spines. They did look huge.
So we are on kitten watch again!

I will update the blog when we have any more news.

This is a repeat mating of the one that produced the handsome TICA Quadruple Grand Champion Alter Alexandrite Akiro. So we are expecting some lovely kittens with personalities to match.
Posted by Alexandrite Siberians at 11:01:00 No comments:

We often receive enquiries for Allergy Visits, at the moment this is something we currently can't accommodate. We are the proud owners of Fudge our Birman and Nog our American Curl. We are also trying to complete the extension and remodelling of the rest of the house and garden. So with work, kittens, our furry family, home/garden, my ongoing health issue we unfortunately don't have much free time.

We are hoping that in the New Year this is something we might be able to re-look at.
Posted by Alexandrite Siberians at 10:54:00 No comments:

We have available one girl from Galina's litter she is a Brown Tabby and White and is as sweet as she looks. She has a sweet little white tail tip!

If you think you can offer this beautiful girl a forever home, please email us at kittens@alexandrite-siberian-kittens.co.uk

All of Memphis kittens have now been adopted. They are a lovely bunch and for Memphis first litter she couldn't have done any better. The kittens are all very cute and playful and she has looked after them really well, keeping them clean and tidy. She has definitely passed on her sweet nature and we think Paavo has passed on his love of food!

Both Galina's and Memphis kittens have been to their first vet visit and all were very brave for their first vaccination and everything checked out ok. Kittens will start going off to their new homes from 30th October. We can't believe where the time has gone!!

As always we have enjoyed having both litters around and they are always doing something to entertain us and make us laugh.

We do have 3 Silver Tabby kittens, 2 boys and 1 girl from Mystique and Hendrix, they are only 4 weeks old at the moment. All are fat balls of fluff and at the moment all kittens are under assessment.
Posted by Alexandrite Siberians at 20:50:00 6 comments:

Some photos of beautiful Memphis. This is Memphis first litter and she has been fantastic mum and the kittens have great temperaments and such a bunch of characters. We will definitely be repeating this mating again next year.

Posted by Alexandrite Siberians at 19:50:00 No comments:

This very sweet girl is Available

She loves to get into mischief with the boys!

Posted by Alexandrite Siberians at 19:33:00 No comments: