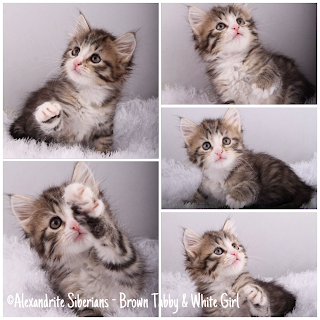 We have a gorgeous sweet girl available, she loves to play with the feather stick just like her mum does. Her parents are the beautiful Musrafy Marishka and handsome Champion Alexandrite Phoenix Mishka.

The photos are at 6 and half weeks old and she will be ready to go to her new home beginning of March. Please email kittens@alexandrite-siberian-kittens.co.uk for more information.
Posted by Alexandrite Siberians at 12:57:00 No comments: 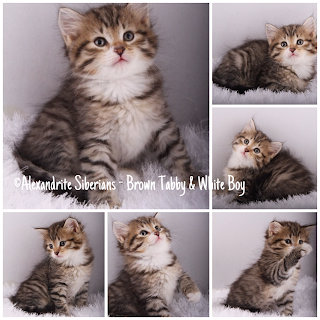 We have available a very handsome, promising young boy. Who might be suitable for showing. His parents are beautiful Musrafy Marishka and handsome Champion Alexandrite Phoenix Mishka. He is a cheeky chap and reminds us of Jamie, who is such a character!

The photos were taken at 6 and half weeks. Please email kittens@alexandrite-siberian-kittens.co.uk for more information. He will be able to go to his new home beginning of March.
Please do not enquire for breeding as we do not let any kittens go with breeding rights.
Posted by Alexandrite Siberians at 12:46:00 No comments: 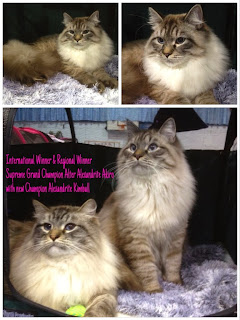 It's been awhile since we went to the last TICA show of 2013. It was at Coventry and it was run by the club Spoticat. This was Kimball's first show and at only just turned 9 months. Yes, the super-sized boy next to Akiro is Kimball and only just out of the kitten class!

Everyone who met him at 6 months couldn't believe the size of him and at now just 10 months old he is 6.3kg, so yes a super-sized boy!

Kimball lives with Akiro and Jamie (his half brother) and they are a bunch of super-sized clowns! When a 10 week old kitten runs around our sofa at hi-speed, yes you duck but you when the boys get going its more of a pull yourself into a tight protective ball and hope for the best! Because with Akiro 7kg, Kimball 6.3kg and Jamie 6kg running around like idiots bouncing off things and jumping on top of doors! Yes both Kimball and Jamie still do this. It really is a different experience watching TV!

Back to the show, Akiro had gone a long for company and he yet again made us very proud with 8 finals. Akiro doesn't really need to go anymore as he has enough points for another Regional Win this year. That means he will have achieved his Lifetime Achievement, with an International Win and 2 Regional Wins. Akiro is the FIRST UK bred Siberian to achieve this and yet again it shows what a one in a million Siberian he is.

Kimball got 4 finals and one of those was a 2nd Allbreed final out of a cat count of 50 and he beat some amazing titled cats. This included 5 other Siberians 4 of which were over 2 years old to 3 and half years old and a RW Supreme Title. He was chilled during the show, and I think you can see from the photos he was happy to be there with Akiro.

It was a great show and we want to Thank all the Judges who picked our boys. Both Andy and I thought back to when we went to the same show in 2006 with Mishka and Cimus. It was our second TICA show and both boys did well. Mishka was only 4/5 months old and I remember the judges not believing he was still only a baby and a girl, as he was far too pretty for a boy!

So that was our last show of the year and we are now looking forward to our first show of 2014. Well we've got to go again because I couldn't resist that new colour lilac Sturdi pen. The boys will look fab!
Posted by Alexandrite Siberians at 11:35:00 No comments: 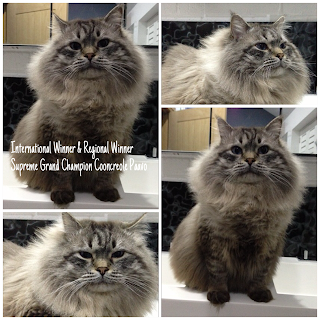 I took a couple of impromptu photos of Paavo yesterday also fondly known as The Potster!
He isn't one for being the most cooperative when it comes to photos but after a quick brush, he seemed to pose and I quickly took some photos. We think he looks fab and that's an indoor coat! And yes we do have the heating on ;)
Posted by Alexandrite Siberians at 14:18:00 No comments:

Andy and I want to wish everyone a Happy New Year and we really hope 2014 is a fabulous year!

2013 was a special one for Andy and I as we picked up our second International Win and another Regional Win for IW & RW Supreme Grand Champion Alter Alexandrite Akiro. Akiro was also the regions BEST ALTER and he achieved a number of firsts for a UK bred Siberian. I will write more about the Regional Show and post photos of his awards soon. It was one of the most proudest moments of our lives when everyone stood up for us to collect our award and Pascal Remy a TICA judge stopped me to say "He was a special boy and really deserved it". It really was a very special evening and we still get that feeling when we see Akiro or look at his awards. Akiro really is one in a million! A very special boy!

This years has seen ups and downs and I think for any breeder who is struggling with their own health will understand breeding and the roller coaster of it can and does take its toll. We have on many occasions this year nearly stopped but for now we are continuing. We want to thank our great friends Maria and Melanie for all their support and to Mim and Simon, who have really been their for us when we needed them. And Erica and Darren who stood up for us during a tough time and the great photos of the girls, especially those birthday ones!

We also want to thank our family too because without them we couldn't do this, we really couldn't. So thanks mum and dad, you help us both so much and cheer me up on the really bad, dark days.

Lastly we want to thank the Alexandrite families who help make this possible too and for all those great update emails and photos. To see one of our little ones having such fun and listening to their stories is why we do this. It's not for the rosettes or awards, yes we enjoy achieving them and are very proud of all our Siberians we show but its really about bringing a little bit joy and hoping that one of our kittens does bring a smile to their owner's face when they need it. That's what it's all about.

We also hope to have some Silver Tabbies in our next litters so please contact us if you want to join the waiting list for a beautiful Alexandrite Silver Tabby Siberian, please see our FAQ too on the blog and email kittens@alexandrite-siberian-kittens.co.uk
Posted by Alexandrite Siberians at 11:40:00 No comments: