With so much going on here we missed posting how AWESOME our boys are!!

A few weeks ago we received some post from TICA and inside were these two certificates. 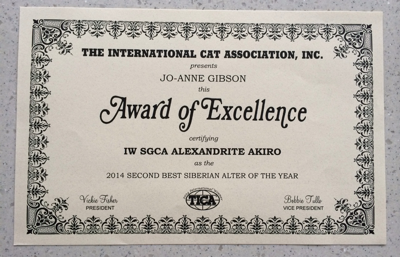 This is Alexandrite Akiro's Award for the show season, and we are so proud of him. He's already received BEST SIBERIAN Alter 3 years ago and this year he only went to a few shows so this just shows how amazing he is.

This means INTERNATIONAL WINNER, and Twice REGIONAL WINNER Awards all adds up to

IW, RW SGCA Alexandrite Akiro is the FIRST UK BRED SIBERIAN to qualify for this AWARD and we are so proud we could burst!

Alexandrite Akiro has achieved some amazing Awards over the years and he's done this without going to every show or going overseas! He really is just the BEST SIBERIAN you could wish or hope to breed and everyone who meets him loves his laid back attitude to life. We have sent off his photo for the TICA Yearbook again and can't wait for his next Award to arrive. Jo is hoping to get everything together when she's well enough.

We still remember that cute little kitten of 4 weeks old with his breathtaking blue eyes and cheeky character, always wanting cuddles in exchange for purrs and head butts. We knew he was AWESOME and he proved to the World he was AWESOME too!

We also recovered an Award for Alexandrite Kimball of BEST Seal Lynx Tabby Point Siberian of the Year.

This goes with his Regional Win too. A fantastic achievement for a boy who was first shown last December at only 10 months old!

Yes! We really have been showing successfully for that long!

It is just more proof that Alexandrite Siberians are TOTALLY AMAZING!

Over the next few days we will post the kittens and adults we have available. First photo is off Alexandrite Pippin and her mum Coco Pops. Pippin is a lovely warm Brown Classic Tabby and her mum is also Brown tabby but spotted. 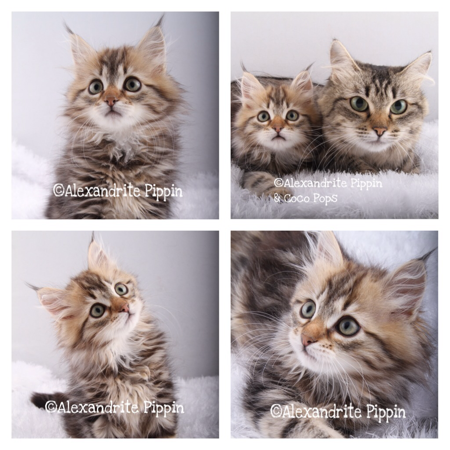 Pippin is a character and has such an adorable temperament with lots of mischief!

Her mum Coco Pops is very sweet too and has done a fabulous job with Pippin.

We would ideally love for the girls to go together as we are retiring Coco Pops who is now 3 years old. Both Pippin and her mum will be ready to go end of September.

A Siberian mum and her kitten is a great way to have two Siberians without as much cost involved as two kittens. As with Pippin and her mum they are also best friends and do everything together. They each are constantly looking for the other one and Pippin always want to be wherever her mum is.

If this isn't an option for you but you are interested in either of the girls or you think you can handle both bundles of cuddles and mischief please email kittens@alexandrite-siberian-kittens.co.uk

Update - 7th October 2014 both Coco Pops and Pippin have gone to their new home together for their next big adventure! 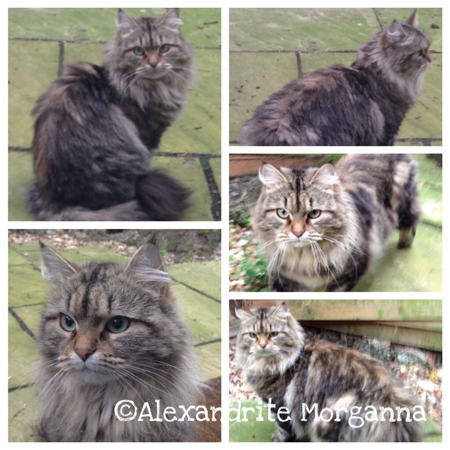 We also have available Mojo, who is a sweet girl and looking for a lovely home to share her life with. Mojo is ready to go to her new home as she has already been spayed and microchipped. Mojo is 3 years old.

With Jo still recovering and my job very busy at the moment evening is the best time to call to chat about Mojo, Pippin and Coco Pops. Please call the homeline 01270 569358 as we have a very poor mobile reception.

Posted by Alexandrite Siberians at 10:37:00 No comments: