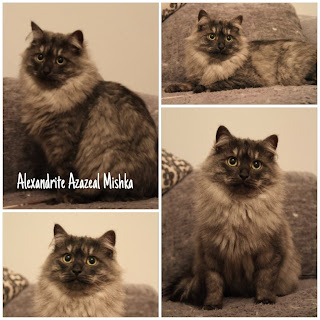 Alexandrite Azazeal Mishka is a handsome Black Smoke Siberian and is named after his dad Mishka and his uncle Azazeal aka Grumpy. This handsome chap is only a year old and is a chunk of a boy. We all call him Little Grumps in loving memory of his uncle and because he is so like him. We kept both him and his sister Anuta's Ekho, who like her brother is a big girl and just as sweet. I don't think anyone would have believed that awkward long legged kitten would be such a striking boy now but we knew he would be. With a dad like Mishka and uncle Grumpy how else could he turn out!
Posted by Alexandrite Siberians at 21:08:00