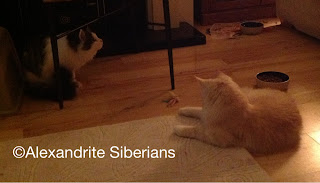 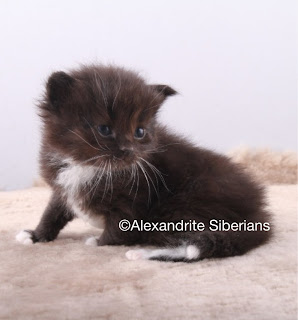 A lot been happening here with kittens growing and adoptions.

Above is a photo of Blaze settling in straightaway with his new family and friend. Blaze was always the quieter of Fe's boys and it's super to see him having fun and settling so quickly.

As for the younger kittens 4 of Memphis kittens have now been adopted and for the time being both silver girls are being evaluated. They are both lovely and it's getting harder to decide who to keep which is a great position as a breeder to be in :)

In Gem's litter both Brown Tortie and white girls and her Solid Black girl have been adopted. Three of the girls are still being assessed and they are so different but lovely again it is going to be hard choice.

Therefore currently we only have available Gem's Black and White boy (photo above). He is a handsome little chap and it must be difficult having so many sisters!

We were hoping to get photos this weekend but Andy has hurt his hand and I am still having a very tough time with my on going health issues. Hopefully will have some soon though because all kittens are growing so fast and looking fab!
Posted by Alexandrite Siberians at 20:27:00